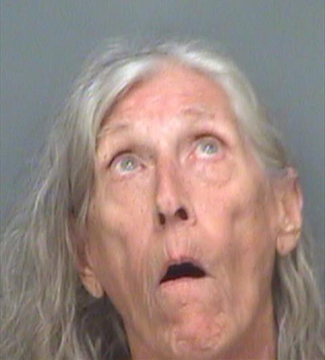 Shirtless octogenarian Mary Ellen Stewart, cops say, was sitting on a bench “in view of the public” when they approached her around 7:40 AM. Stewart, who was on the property of a St. Petersburg hospital, had her breasts “completely exposed” and “security and nursing staff witnessed this,” a sheriff’s deputy reported in an arrest affidavit.

Stewart, a deputy noted, “held the box of wine over her head and began to drink from the spout.” When officers sought to confiscate the wine, Stewart allegedly “began to shake the box intentionally towards deputies” in an attempt to splash them with the pink-hued liquid.
———————————————–