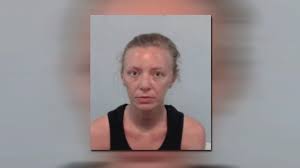 Woman Shoots Husband In The Balls After He Tries To Take Her Air Conditioner!!

COLUMBIA COUNTY, Fla. – A woman in Columbia County, Florida is back in jail after she failed to show up in court for an aggravated battery charge.

In October of last year, Kimberly Dunn, 35, shot her ex-husband in the testicles after he tried to take an AC unit, according to an arrest report.

Dunn’s estranged husband said he came to her home — with his brother — to pick up the unit. He had discovered that she was attempting to sell it on Facebook, the report said.

The couple was going through a divorce, the arrest report said.

When the man and his brother attempted to unhook the unit, Dunn sat on it to prevent the two men from taking it, the report said.

When the ex-husband approached, he tried to remove her from the AC unit, but Dunn produced a pink stun gun and attempted to electrocute him, according to the arrest report. Dunn was struck in the head and dropped both the pink stun gun and a handgun, the report said.

Dunn reportedly got up off the ground and shot him in the testicles with the handgun. The man’s brother pushed Dunn to the ground and attempted to help his brother and drove him to the hospital.

The report said the ex-husband’s brother screamed, “You shot my brother” and began choking her until she blacked out.

Dunn’s ex-husband picked up the gun after the shooting and brought it with him to the hospital, the report stated.

Dunn was arrested the same day and was taken to the Columbia County jail without incident. She told deputies she didn’t mean to shoot her ex-husband and was only trying to scare him, the report said.

On Thursday, June 14, Dunn was arrested for failing to show up in court for the shooting incident. She faces an additional charge of contempt of court.
——————————–
Honestly we don’t know how we missed this story back when it originally happened!! I guess we all can assume that this man’s nutsack is ok… For more incidents in fuckery invovling franks and beans check the see also links below!

see also:Woman Attempts To Break Husband’s Dick Of With Her Bare Hands!!