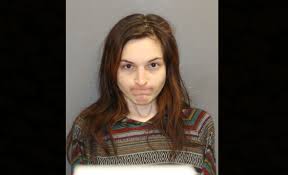 Montana Woman Charged With Using Machete To Force Ex-Boyfriend To Have Intercourse!!!

Samantha Ray Mears has been charged with wielding a machete in order to force a man to have sex with her.

Court documents allege that Mears entered the residence of an ex-boyfriend while he was not home. When the man returned home, Mears reportedly confronted him with a machete, ordered him to get on the bed, and remove his clothes.

The man told police that he felt he could not leave the room without being hurt by Mears.

Mears then removed her pants, climbed on top of the man, and engaged in intercourse, according to court documents.

The man told police that Mears continued holding on to the machete during intercourse.

The two began arguing, and the victim pretended to call an acquaintance but actually called 911, and was able to slowly back out of the room and escape.

She also reportedly bit the victim on the arm, and officers noted a bite mark on his arm.

The victim was able to provide officers with photos of Mears on the bed wielding the machete.

Prosecutors requested that bond for Mears be set at $50,000.

Mears, 19 years old, has been charged with two felonies: aggravated burglary, and assault with a weapon. She has also been charged with the following misdemeanors: unlawful restraint; partner/family member assault; and two counts of criminal mischief.

There is no word yet on whether additional charges – such as sexual intercourse without consent – may be filed.
———————-