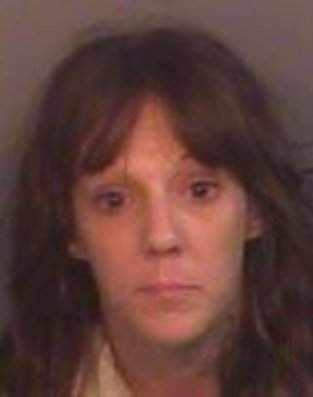 According to an arrest report, Rachelle Marie Tocco, 30, was arrested Sunday after an off-duty officer witnessed her stealing clothes and hiding them in a lunchbox. Police said she would push a cart into walkways to check for employees, then retreat into the aisle to hide more clothes in the lunchbox, shielding her face when she saw employees walk by.

Tocco was stopped while leaving the store and admitted to stealing, police said.

After arriving at the county jail, police said Tocco removed a “crack pipe with cocaine residue” and 4.5 grams of alprazolam, also known by the brand name Xanax, from her vagina during a search.
————————————-

Just had to beam up to Scottie one last time before being detained huh?!? I think we’re more shocked at this crackhead freebasing in the back of a squad car than her placing her crack pipe in her pussy.. We’re not that shocked because we’ve covered stories of women stashing bigger items in their pussy’s from the cops (view see also links for more fuckery)!!

see also:Florida Woman Who Smoked Crack From Tire Gauge Attempted To Hide “Pipe” From Authorities In Her “Uterus”!!