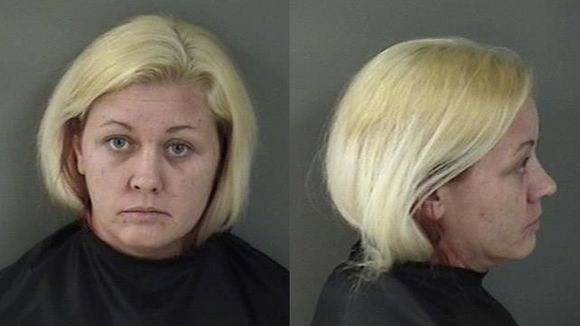 VERO BEACH — A 32-year-old woman who told deputies she smoked drugs from a tire gauge “stuffed” in her uterus was arrested, an affidavit states.

Indian River County sheriff’s deputies on March 27 encountered the woman who reported puffing drugs from a pipe positioned in her private parts.

Deputies stopped a Dodge Durango traveling east on 45th Street. It was about 10 p.m. and one of the Dodge’s headlights was out.

A deputy reported smelling marijuana while approaching the vehicle.

Investigators reported finding a “used syringe with a clear liquid substance” on the passenger, identified as Melissa Kay Moneyhon.

“While Moneyhon was detained, she advised she had stuffed a tire gauge in her uterus which she used to smoke crack cocaine out of it,” the affidavit states.

According to dictionary.com, a uterus is, “The enlarged, muscular, expandable portion of the oviduct in which the fertilized ovum implants and develops or rests during prenatal development; the womb of certain mammals.”

Tire gauges often are kept in glove compartments, as opposed to uteruses.

At the jail, Moneyhon “removed the tire gauge from her person,” and investigators say it was a crack pipe.

The tire gauge had a white substance on it that tested positive for cocaine.

Moneyhon, of the 8700 block of 20th Street in Vero Beach, was arrested on charges including possession of cocaine and possession of drug paraphernalia.
————————-

This woman stuffing this makeshift pipe up her chocha isn’t anything new to us!!! To view more stories involving the artful concealment of drugs in pussies view the see also links below!!!