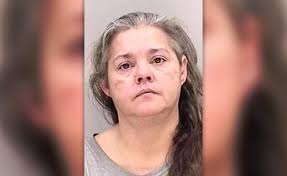 Arrested For Attempting To Rip Boyfriend’s NUTS OFF!!!

Due To Articles Length We’ve Decided To Repost:

AUGUSTA, GA (WFXG) –
An Augusta woman was arrested Sunday night for reportedly attempting to tear off her boyfriend’s genitals.

At around 8:16 p.m. on Feb. 11, deputies responded to a home on Alden Drive for reports of a domestic situation. Deputies spoke with the victim, who told them that while he and his girlfriend, forty-seven-year-old Melinda Dillashaw were sitting around the house, he told her to start cleaning the house, which he says was fully covered in animal feces. He says that angered Dillashaw and she started a verbal altercation, which turned physical when she grabbed him by the genitals and attempted to rip them off.

Dillashaw told deputies the victim got mad at her for the state of the house, threw her on the ground, and tried to choke her. She says that’s when she grabbed him by the genitals and attempted to rip them off.

EMS arrived on the scene and treated the victim for bleeding coming from his genitals.

Dillashaw was placed under arrest for simple battery, family violence. While on the way to the jail, the arresting deputy says he heard her say “you’re damn right I was going to rip his nuts off.” When he asked her to repeat herself, she murmured under her breath.
—————————–

Nothing much more to say about this fuckery, this fuckery speaks for itself!!! For more stories involving people attempting to break people’s dicks or balls off feel free to visit the see also links below!!

see also:Woman Killed Father-In-Law By Squeezing His NUTS Until They Burst!!!

see also:Woman Attempts To Break Husband’s Dick Off With Her Bare Hands!!

see also:Woman In India Blindfolds Man And Then CUTS Off His Dick!!! Her Motive… He Was Going To Marry Someone Else!!!